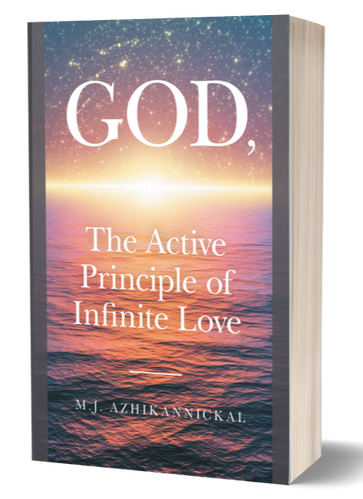 Thought-provoking and enlightening, God: The Active Principle of Love examines the “dual componency” of the metaphysical and the physical that encompasses human existence. Addressing the traditional teachings of a variety of world religions, M. J. Azhikannickal deconstructs the conventional understanding of “God” and “spirituality” and presents a refreshing view of our relationship with the Divine.

Human spirituality is a Theo-centric metaphysical ideation attained by disciplined physical instrumentation. Humans have a built-in free will through which they choose to “tilt” to the positive or the negative. Their choices impact society in general, because as individual entities, they are still intricately connected in the human aggregate. Tendencies to the negative have led to the degeneration and disintegration of all society, but an awareness of the Divine within us and a move to more positive choices will usher in a new era and a new civilization, where every human being, born and unborn, matters.

​ Although philosophical in nature, the book also touches on the practical implications of God as the active principle of love, including justice, relationships, sexuality, and charity. Readers will be challenged to expand their understanding of reality and align their actions with their understanding of divine love.
Please leave an Amazon Review

Within the synergic dual componency of the physical and the metaphysical within the human aggregate existence, the author attempts to deconstruct the traditionalist modalities of spiritual enrichment-paradigms, by presenting a fresh perspective on the conceptualization of God-head and a  Theo-centric moral regeneration, the sine qua non for humanity’s collective engagement to ameliorate the civilizational morass into which  the modern world order has plummeted. A Theo-focussed, conscience-driven moral awakening will actuate and nourish a new ‘egalitarian’ paradigm rooted in equitable distribution of earth’s resources and opportunities for all of mankind. The book also brings up the practical implications of God as an active principle of love including justice, relationships, sexuality, and charity.

“God, the Active Principle of Infinite Love” journeys into the human existential reality which is furcated into its mutually complementary physical and metaphysical realms as a synergic phenomenon pivoting on its ‘fulcrum’, the monistic God whose ‘realization’ is mankind’s bonafide spiritual enrichment. The free-willed human being, therefore, attains the genuine moral normativity vis-a-vis the traditionalist symbolistic modalities of spiritual engagement, through his Theo-centric, conscience-driven embracement of the positive of the ‘moral dialectics’ in preference to its ‘conceptualized’ antithesis, evil. In the author’s perspective, this new ‘awakening’ actuates and nourishes the emergence of a new world order, replacing the  civilizational paradigm of the world today which is ravaged by man’s obtunded consciousness  of his conscience due to the egotistical amplification of his ‘selfness’, and the maximalist degeneracies of religionism, politicism, scientism, economism, and nationalism. ‘Egged on’ by the hallmarked above negativities, the current world order appears to be on the verge of “committing suicide”. (Toynbee) Readers are challenged to expand their understanding of reality and align their ‘actions’ with their understanding of divine love.
​
God, the Active Principle of Infinite Love, by M.J. Azhikannickal produced by FriesenPress is available for order from most online book retailers, including the FriesenPress Book store and Amazon. The e-Book is available for Kindle, iBooks, Kobo, Nook, and GooglePlay.
Thank you for reaching out, M.J Azhikannickal will get back to you as soon as possible.